Supported from the very start in 2009 by Butterfly, the ITTF Hopes Programme is one of the most exciting innovations promoted by the International Table Tennis Federations in recent years.

Under the direction of Mikael Andersson, the ITTF Executive Director for Education and Training, with Dejan Papic in the role of Head Coach and Zita Pidl, the Team Manager, a very effective and successful management team is in place.

The ultimate goal may well be to win a medal the Olympic Games or at the World Championships; the starting point is the ITTF Hopes Programme for players under 12 years of age

Each year the ITTF Hopes Programme make progress bringing together a truly global team and giving an opportunity to players from countries which are not steeped in the traditions of gaining podium place at the world’s major events.

A place in the World Hopes is a prize in itself; the eyes of the young players light up when they receive their attractive ITTF World Hopes Team shirt supplied by Butterfly; simply wearing that shirt raises the standard of play. It is a shirt for the very few, it is a precious gift. 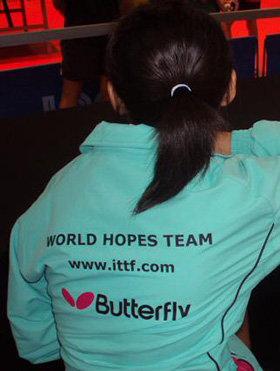 Notably, players who were in the original group in 2009, three years later, still wear the shirt with immense pride.

One of the most exciting features in 2011 was the introduction of the ITTF Hopes Week and the ITTF Hopes Challenge. The programme comprised a five day training camp followed by a two day tournament and included seminars for coaches.

Organised in June, the home for the concept was the Butterfly supported Werner Schlager Academy in Schwechat on the outskirts of Vienna and two sentiments were overriding; from the coaches it was that they would rather be watching the energy created by the Hopes players, from Werner Schlager that he wished such a concept existed when had been eleven years old.

Who knows, he might not have been selected? However, who knows; is there a member of an ITTF World Hopes Team who may follow in his footsteps and climb to highest of heights, world champion.
Who knows but the formula is in place.